Buddhism For The West 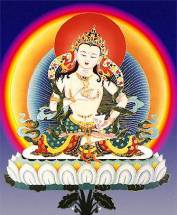 The Dalai Lama And Buddhism For The West:

While many Westerners are learning Buddhism, their predominantly Asian teachers are learning to adapt to the mores of the West.  In 1993, a conference in India under the auspices of His Holiness the 14th Dalai Lama was held at which several Western, and a number of Tibetan teachers, agreed to respect six important principles.

In March (16 - 19) of 1993, a group of 22 teachers of Buddha-Dharma from the major denominations of Buddhism that are active in Europe and America met in Dharamshala, India under the auspices of  His Holiness the 14th Dalai Lama: Tenzin Gyatso.  Also present were the Tibetan lamas Drikung Chestang Rinpoche, Panchen Otrul Rinpoche and Amchok Rinpoche.

The aim of the meeting was to discuss openly a wide range of issues concerning the transmission of Buddha-dharma to the Western lands. The conclusions were that:

1. Our first responsibility as Buddhists is to work towards creating a better world for all forms of life. The promotion of Buddhism as a religion is a secondary concern. Kindness and compassion, the furthering of peace and harmony, as well as tolerance and respect for other religions, should be the three guiding principles of our actions.

2. In the West, where so many different Buddhist traditions exist side by side, one needs to be constantly on one's guard against the dangers of sectarianism. Such a divisive attitude is often the result of failing to understand or appreciate anything outside of one's own tradition. Teachers from all schools would therefore benefit greatly from studying and gaining some practical experience of the teachings of other traditions.

3. Teachers should be open to beneficial influences from secular and other religious traditions.  For example, the insights and techniques of contemporary psychotherapy can often be of great value in reducing suffering experienced by students.  At the same time, efforts to develop psychologically oriented practices from within the existing Buddhist traditions should be encouraged.

4. An individual's position as a teacher arises in dependence on the request of his or her students, not simply being appointed as such by higher authority.  Great care must therefore [be] exercised by the student in selecting an appropriate teacher.  Sufficient time must be given to making this choice, which should be based on personal investigation, reason and experience. Students should be warned against the dangers of falling prey to charisma, charlatanism or exoticism.

5. Particular concern was expressed about unethical conduct among teachers. In recent years both Asian and Western teachers have been involved in scandals concerning sexual misconduct with their students, abuse of alcohol and drugs, misappropriation of funds, and misuse of power.  This has resulted in widespread damage both to the Buddhist community and to individuals involved.

Each student must be encouraged to take responsible measures to confront teachers with unethical aspects of their conduct.  If the teacher shows no sign of reform, students should not hesitate to publicize any unethical behavior of which there is irrefutable evidence.

This should be done irrespective of other beneficial aspects of his or her work and of one's spiritual commitment to that teacher.  It should also be made clear in any publicity that such conduct is not in conformity with Buddhist teachings.  No matter what level of spiritual attainment a teacher has, or claims to have, reached, no person can stand above the norm of ethical conduct.

In order for the Buddha-dharma not to be brought into disrepute and to avoid harm to students and teachers, it is necessary that all teachers at least live by the five lay precepts.   In cases where ethical standards have been infringed, compassion and care should be shown towards both teacher and student.

6. Just as the Dharma has adapted itself to many different cultures throughout its history in Asia, so it is bound to be transformed according to conditions in the West.  Although the principles of the Dharma are timeless, we need to exercise careful discrimination in distinguishing between essential teachings and cultural trappings.

However, confusion may a rise due to various reasons.  There may be a conflict in loyalty between commitment to one's Asian teachers and responsibility to one's Western students.  Likewise, one may encounter disagreement about the respective value of monastic and lay practice. Further more, we affirm the need for equality between the sexes in all aspects of Buddhist theory and practice.

Western teachers were encouraged to take greater responsibility in creatively resolving the issues raised.  For many, the Dalai Lama's advice served to confirm their own feelings, concerns and actions.