Kali as 'Mahakala' is frequently encountered in Han Chinese variants on the Tibetan Lion's Roar! Tantric Martial Art. Usually, the Tantra has degraded into mere remnants, but the deep origination of the Lion Symbol is echoed by its connection with the Goddess Kali, with the Dharama Protector Mahakala, and with the Goddess Durga - an aspect of Kali.

Buddhism took many aspects of Hinduism into itself, and indeed started as a reformist movement within Hinduism.

The Lion symbol is deeply ingrained in both traditions, and both Hinduism and Indian Mahayana Buddhism were precursors for Tibetan 'Tantric' Buddhism, the matrix from which the Lion's Roar! Lama Martial Art emerged, and subsequently migrated into China and then the West. 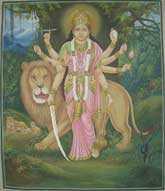 The below information is courtesy of www.sivasakti.com

In the pantheon of Tantric deities, Kali is mentioned as the first of the 10 Great Cosmic Powers because, in some way, she is the one that starts the motion of the "Wheel of Universal Time". She is the primal impulse in the phenomenal existence and becoming. On the other hand, at the end of cosmic cycle of manifestation, the time (or Kala, in sanskrit) "devours" all the worlds of all the three planes of Creation, namely the physical universe, the astral (or subtle) universe and the causal universe. The Great Cosmic Power Kali, "devours" in the end even time itself (Kala), hence She is considered the primordial cause of creation and dissolution of manifestation. The famous tantric text Nirvanatantra associates Kali with the supreme Brahman representing both absolute Existence and Consciousness in manifestation. This association lead to the adoration of the Great Cosmic Power Kali both in a metaphysical aspect (with no attributes) and concrete aspect (with functions and particularities).

The Yantra of Kali

In conformity with the tantric spiritual tradition, the whole Manifestation springs from the Infinite Consciousness and beatific union of Shiva with Shakti The creation function is performed by the aspect of Shakti known as Brahmani, the maintaining or continuity of creation is realized by Shakti Vaishnavi. Both the creation and the maintenance aspects imply also the function of "distruction" or "death" of any form of Manifestation, function performed by Rudrani Shakti. In particular, Brahmani, Vaishnavi and Rudrani Shakti are nothing else than the feminine aspects of the great gods that form the Hindu trinity of creation : Brahma Vishnu and Rudra (or Shiva).

Her darkness dissolves everything.
The simultaneous existence of these three processes in Manifestation evidently explains the tantric affirmation that the act of Creation was not unique and does not belong only to a certain moment in the past and also, the act of Destruction is not unique, and does not belong solely to a certain moment in the future, but they appear in every moment of time as flashes succeeding each other so rapidly that they create the illusion of continuity and reality. The state of divine ecstasy (Samadi) appears grace to an intense and perseverant spiritual practice, which implies the dissolving of the mental and corporeal consciousness into the supreme consciousness of Paramashiva (God, Holy Father), which transcends all duality.

Kali is described in Kalitantra as a goddess having the skin complexion of a dark cloud, before the storm. She dances above the inert body of Shiva, the couple symbolizing the two aspects of Reality : Shiva - the static, Transcendent aspect belonging to Consciousness and Kali - the immanent aspect of Consciousness. In this iconographic representation Shiva is white because he signifies the Divine Light without support (prakasha). He is inert like a corpse (shava) because in the absence of movement and action, the Consciousness is pure, homogenous and compact. On the other hand, the dance of the Great Cosmic Power Kali signifies by excellence the dynamic, active aspect of Divine Consciousness in Manifestation and the dark color of her skin indicate that in the processes of Creation, Kali is the one that "dissolves" everything thus being associated to darkness and void.

In another perspective Kali is the creator of worlds from the ashes of the purifying fire of Divine Consciousness, a consciousness that burned all the impurities, residues and imperfections of the forms of manifestation. Thus the action of Kali is oriented towards spiritual evolution, inducing sometimes dramatic impulses towards the spiritual perfection of human beings. In each and every situation Kali employs a divine spiritual discernment. Those who successfully pass all her tests are spiritual heroes (vira) and have the grace of the Great Goddess Kali on their side.

In the beginning, before the first creative impulse is manifested by God's will, the Divine Energy (Shakti) is in a state of potentiality, perfectly united with Shiva in his transcendent aspect. This state is designated by the texts of spirituality as sat-chit-ananda(Pure Existene, Pure Consciousness, Supreme Bliss).

She is the time beyond time
It is the Supreme Shakti that assumes the responsibility of Creation. Here sovereignty is often mentioned by naming her Adi-maha-vidya, the first of the Great Cosmic Powers, but this must not lead us to the idea of an hierarchy between the Cosmic Powers. Kali is represented sometimes sitting on a golden throne sustained by five bodies (like the body of Shiva), surrounded by trees made of precious stones. At her feet there is a golden sand beach washed by the Ocean of Immortality.

Kali is also called Adya-shakti, in her quality of primordial creative power. Because she is correlated with the process of Creation, she is also named Maha-maya (The Power of Universal Illusion). The fact that she is represented naked signifies the transcending of all limitation by identification with the unlimited Power of Divine Consciousness.

The action of Kali in Manifestation is related to the destruction and purification functions of time (Kala). This aspect is signified by the human skull the Great Goddess holds in one of her hands. Kali herself is beyond time, but she is using time to dissolve the Creation back into the Primordial Consciousness (God). This is the reason why she is also called Mahakali. On the other hand, she will offer to her advanced devotees bhukti - the experience of happiness and fulfillment in this world and mukti - the divine ecstasy of the Transcendent Reality.

She will destroy your ego so that you can be reborn
One of the most important aspects of Kali is that of Goddess Durga, the conqueror of the demon Mahishasura. This demon represents in the Hindu tradition the incarnation of all forces of Darkness. In the vedanta philosophy there is the concept of Divine Incarnation (avatara). An avatara comes on Earth to lead the humanity towards a profound spiritual transformation. Rama, Krisha, etc. were considered avatars of the Lord of the Universe (Ishvara or Vishnu, the male aspect of Divinity), but for those to adore God in his aspect of Divine, protective and all-powerful Mother, the Great Goddess Durga represents the only feminine avatar that destroys evil in all its demoniac and satanic aspects. Thus, the Hindu mythology says the invincible Goddess was victorious in the battle with the demons and their great king Mahishashura, saving the Gods from captivity and restoring the order in Manifestation. The profound signification of this myth is that in the human being there are benefic and malefic energies and forces (symbolized here by the Gods and respectively the Demons) fighting a fierce battle for supremacy. The Goddess Durga, a personification of the Great Cosmic Power Kali, bestows grace and divine help to those that invoke her with intensity, so their spiritual forces would develop and suppress the negative influences of their psychic and mental. Durga, the Divine Light, destroys and burns in the terrible fire of here pure consciousness any malefic force or residue of ignorance.

Her force awakens Kundalini
The Kali Sadhana implies the spiritual effort of purification of the subtle force centers (Chakras) and the ascension of the Divine Energy Kundalini, which lies dormant at the base of the spine, in Mulhadara Chakra. The ascension of Kundalini Shakti represents one of the most important aspects of Kali. This process is directly correlated to the practice of sexual continece, with transfiguration in accordance with the Tantric principles.

子 "Ji" as in Seed, or Son (note the Buddha's Son's and Seeds, in relation to Lion's Roar! Tantric Buddhist Martial Arts symbolism.

師子 ("Si-Ji") Simha, a lion; also 獅子 Buddha, likened to the lion, the king of animals, in respect of his fearlessness.

師子乳 Lion's milk, like bodhi -enlightenment, which is able to annihilate countless ages of the karma of affliction, just as one drop of lion's milk can disintegrate an ocean of ordinary milk.

金毛獅子 The lion with golden hair on which Bodhisattva Mañjuśrī (Wenshu) rides; also a previous incarnation of the Buddha.

師子光 Simharaśmi. 'A learned opponent of the Yogācāra school who lived about A. D. 630.' Eitel.

師子吼 ("Si-Ji-Hao") also: 獅子吼: Simhanāda. The lion's roar, a term designating authoritative or powerful preaching. As the lion's roar makes all animals tremble, subdues elephants, arrests birds in their light and fishes in the water, so Buddha's preaching overthrows all other religions, subdues devils, conquers heretics, and arrests the misery of life.

師子國 Simhala, Ceylon, the kingdom reputed to be founded by Simha, first an Indian merchant, later king of the country, who overcame the 'demons' of Ceylon and conquered the island.

師子座 (or 師子牀) Simhāsana. A lion throne, or couch. A Buddha throne, or seat; wherever the Buddha sits, even the bare ground; a royal throne.

師子奮迅 The lion aroused to anger, i.e. the Buddha's power of arousing awe.

師子尊者 師子比丘 Āryasimha, or Simha-bhiku. The 23rd or 24th patriarch, brahman by birth; a native of Central India; laboured in Kashmir, where he died a martyr A.D. 259.

師子身中蟲 Just as no animal eats a dead lion, but it is destroyed by worms produced within itself, so no outside force can destroy Buddhism, only evil monks within it can destroy it.

師子遊戲三昧 The joyous Samādhi which is likened to the play of the lion with his prey. When a Buddha enters this degree of Samādhi he causes the earth to tremble, and the purgatories to give up their inmates.

師傅師子音 "Guru with a Lion's voice" also 師傅師子吼 or 師傅獅子吼 as "Guru Lion's Roar" BOTH names for Padmasambhava - the Lotus Born (called Guru Rinpoche) the Patriarch of Tantric Buddhism to Tibet.