This text and pictures are  published under the permission of
The Office of Tibet,
the official agency of His Holiness the Dalai Lama in London.

The Body, Speech and Mind of a Buddha


The Body of a Buddha 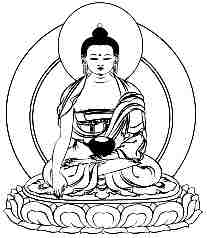 What is a Buddha? A Buddha is someone who has abandoned all unwholesome action, all obstructions to knowledge and their remnants. When one abandons unwholesome action, an imprint remains on the mind which acts as an obstructions to knowledge, just as when one drops an onion from one's hand, a smell remains on it. The Buddha has abandoned even the last remnants of these obstructions to knowledge. He perceives the reality of all phenomena directly and has fully developed compassion through meditation, so he spontaneously works for the welfare of all beings. Over countless aeons, he has accumulated limitless merit through the practice of the perfections of giving, ethics, practice and effort and has meditated with a firmly stabilized mind on the antidote to the conception of an inherently existent self-emptiness.

From the point of view of Tantra, he meditated on deity yoga, employing the many subtle and powerful means of Tantra, which enables one to attain Buddhahood in one lifetime.

Although there may be countless Buddhas in any aeon, in the present aeon 1002 Buddhas are to appear as such, of whom four have already appeared. They are already enlightened, but take birth as humans to demonstrate the twelve deeds of a Buddha and guide sentient beings towards enlightenment. The tantric path to enlightenment is peculiar to Shakyamuni's teaching and is otherwise very rare. Shakyamuni taught the sutras to ordinary disciples, in the form of a Buddha. However, he taught superior disciples the tantras in the form of a king or in the aspect of various meditational deities.

There are many ways of representing the body of the Buddha. Though they may reveal different aspects, all are the Buddha's body in nature and offerings made to them are equal to those made to Buddhas themselves. Thus, the Buddha may be portrayed as a monk, like Buddha Shakyamuni, as slightly wrathful meditational deities such as Heruka, or Guhyasamaja, or as female deities such as dakinis, as wrathful male or female deities with ugly forms and animal heads, or as embracing consorts. There are also occasions when Shakyamuni Buddha is represented as a rabbit or an elephant, recalling exemplary deeds he performed in such lives during his career as a Bodhisattva.

Similarly, religious images are also made of Arhats, those beings who have attained personal liberation, religious protectors and Lamas. If the image is a statue, it can be made of any material, whether clay, stone, wood or metal and while there are no restrictions on size, it must strictly adhere to the prescribed proportions and so forth. Whatever material is used, such images should be respected equally, a statue should not be valued more highly than another because it is made of gold and the other of clay. The same is true of two-dimensional images, which in Tibet were most commonly paintings on cloth, block prints or murals.

The Buddha's Speech or Dharma

From the point of view of experience, the Dharma is ultimately the abandonment of afflictions and obstructions to knowledge in a being's mental continuum. The way to attain this true cessation is to follow a true path. The means of communicating this understanding is the speech of Buddhas and Bodhisattvas, which in written form comprises the collection of scriptures. Both of these are also referred to as the Dharma. When the Buddha spoke, countless beings each found in his words what benefitted him or her most and could understand it in his or her own language.

Shortly after the Buddha's passing away, memorised collections of his teachings were recited in four different Indian languages, including Sanskrit. Later these were translated into Tibetan, Chinese, Mongolian, Korean, Japanese and so forth. The Tibetan canon includes the Kangyur, about 108 volumes consisting of translations of Buddha's own words, and the Tengyur, about 200 volumes of commentries to teachings contained in the Kangyur composed by Indian scholars, and some commentaries to those written by later Tibetan scholars. Recently, translations of Buddhist texts have also begun to appear in Western languages. No matter what language is used to convey them, what distinguishes such texts or teachings is that their meaning is conducive to sentient beings' achieving enlightenment. This is reflected in the subjects dealt with by Buddhist teaching. The Buddha is said to have given 84,000 instructions, which elaborate on all the afflictions and the means of overcoming them. When condensed, these can be included in the Three Baskets of Doctrine- so called because the original palm-leaf texts in India were contained in baskets. The Basket of Discourses explains the three trainings of ethics, meditative stabilization and wisdom, the Basket of Discipline explains ethical discipline and meditative stabilization, and the Basket of Knowledge explains the divisions of phenomena.

When the Buddha was passing away, some people complained that he was leaving nothing behind to show them the way to enlightenment. To this the Buddha replied that they would find what they needed in the texts recording the meaning of his words.

To show appreciation and respect towards the Buddha's teachings, some texts were written out in gold, silver and other precious substances, especially the Discourse on the Perfection of Wisdom. In general, scriptures are kept carefully in a high clean place, also to denote respect. In temples, the statue of the Buddha, which may form the principal object of offering, is generally flanked by high stacks of books of scriptures which represent his speech.

To represent the Buddha's mind, which is free of all obstacles and has acquired all knowledge, and to gain merit by paying respect to it, people have built stupas.

The many aspects of a stupa symbolize many things, such as the ten wholesome actions, great compassion and the ability to help all sentient beings.

Stupas were erected at the sites of Buddha Shakyamuni's birth, renunciation, attainment of enlightenment and his passing into Parinirvana, as well as being built over the relics of previous Buddhas.

Circumbulating them is a means of accumulating merit. In Magadha, an Indian kingdom at the time of the Buddha, there was an old stupa reduced to a mere mound. The Buddha circumbulated it, and when asked why, answered that there were holy relics within it.

In response to a question from the gods of the Heaven of Thirty-three, the Buddha explained what to place as relics in a stupa.

These are the four types of relics:

After the Buddha's passing away and the cremation of his body, the people of many kingdoms argued over possession of his remains. A disciple finally settled the dispute by dividing the remains into eight, each portion being enshrined in a stupa in each kingdom. The custom of erecting stupas over the remains of great saints and lamas also continued in Tibet. In some cases, for example the Dalai Lamas, the whole body was enshrined.

Stupas can be of any size and can be made of any suitable material. Relics, other than the four described above, such as statues, clothes or scriptures are also acceptable. For example, in Tibet, sets of thousands of stamped clay images would commonly be made to be placed in stupas.